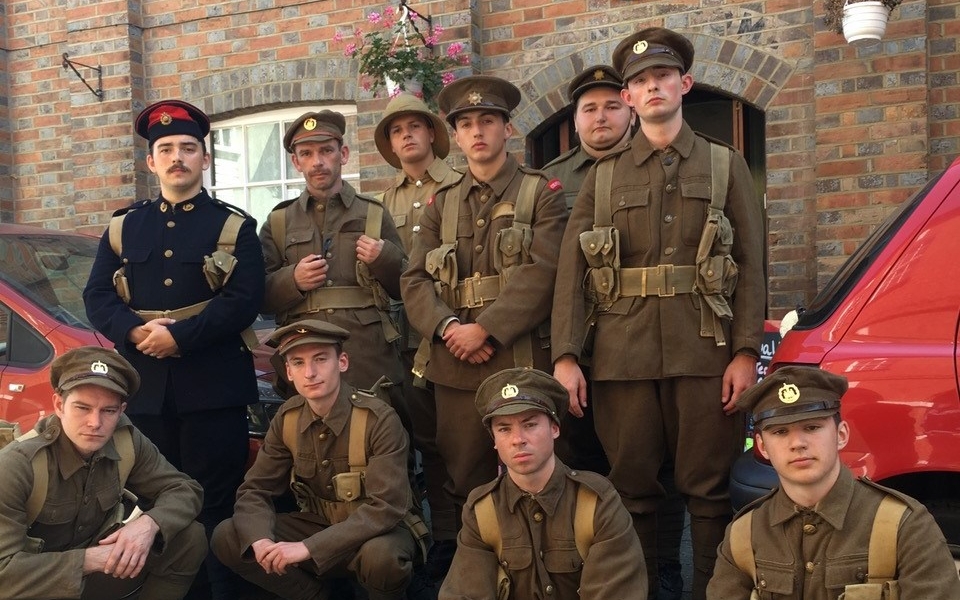 Professional and volunteer actors appeared over a hot July weekend in Wimborne town centre, dressed in First World War uniforms and each representing ten local men killed in action during the Great War.

When approached as they walked about the town, the actors silently handed out a small card with personal details, researched with local historian and Town Crier, Chris Brown, about the soldiers represented. 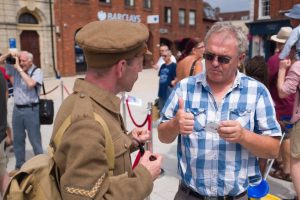 People encountered them in many different places from the town square, recreation ground, market, back alleys, supermarkets, in the Salvation Army café, and on the Minster Green.

You can see a list of the soldiers here. . . 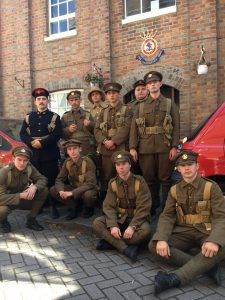 One of the most interesting encounters was in the Recreation Ground. several teenage lads started to shout and jeer when they saw the soldiers, one lad – of dual heritage – shouted: ‘You won’t let me join the army, will you? ‘Cos I’m black’

One or two of the ‘representers’ walked over to the lads and gave out their cards. More banter followed. The silent soldiers went and did some of the marching in circles leading to the tableaux, song and shout. The lads shouted back. But then I heard some of them telling others to be more ‘respectful’. I walked over to them and discussed the concept behind the project. Surprisingly, they listened in complete silence, with full eye contact. As soon as I’d finished, they said how great they thought it was – even the dual heritage lad.

Later I discussed the encounter with the actors – some of them had been quite wound up by it – I asked them if they’d like to go back the next day and one said: “Yes, but can we take some proper guns!”!  I think he was joking.

The focus and commitment of the actors in preparation for the project and during the long hot weekend was exemplary.