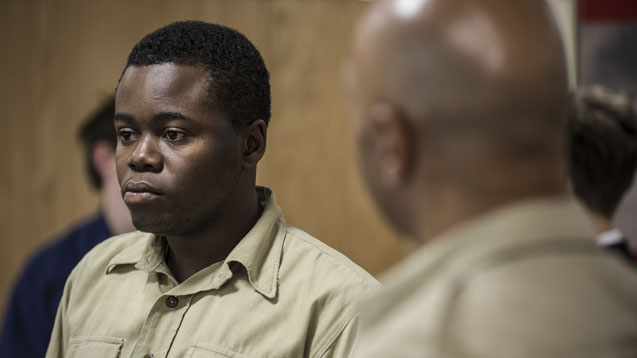 GI Joe tour re-started big time yesterday with three performances. After setting up at Oakmead Academy in Bournemouth on Thursday afternoon, we started our first performance for Year 8s at 9.15am on Friday and by 1 pm had finished a second with Year 7s, with GCSE Drama at the rear of the hall. Both sets of audience seemed engrossed, barely a sound during the show, except for a couple of intakes of breaths when Joe and Sgt. Leroy ‘face off’ in the scene where Joe questions the inferior status given to the African Americans. The climactic fight scene also has the boys expressing sounds of excitement.

In both workshops afterwards, the young people were fully engaged with far more putting their hands up to contribute to the hot seating and statyue-making than we could accommodate. They challenged Bud’s casual racism with great passion, articulating well their sense of outrage at his negative attitudes. Both groups identified closely with James, Lily’s younger brother – many of them blaming him for ‘telling tales’. It reminded me that there is a strong moral code about keeping confidences with eleven and twelve year olds.

If we needed to be convinced that the young people really were listening well, a small incident afterwards removed any doubts. A group of girls came to the front of the hall to talk to Sharon, whom they remembered from a previous project at Heathlands Primary a couple of years earlier. One of them asked me for a certificates to attend the dance, which I had offered the audience in role as the Minister in the Chapel scene! I guess it shows direct address to the audience in theatre (as the Vicar does), really does make the audience feel involved – and so break down the fourth wall.

And so after striking the set and props and going home to find a missing jacket, we drove off into deepest Dorset, past the new turrets of Poundbury (once used as a camp for the African American GIs) up towards Yeovil, skirting Cerne Abbas and its proud giant, past the wooded valleys of Chantmarle and its ancient manor house (formerly a Police College), about which there are several good ghost stories, and onto the ancient flint and chalk village of Melbury Osmond, alleged home of the infamous Dorset Ooser, the devil cum minotaur figure that marauds through Dorset’s folk history to this day in Maytime.

The locals were, happily, a fairly friendly bunch, who fed and watered us very well and turned out in good numbers to watch the show. What a great scheme Artsreach is, run as it is mainly by local promoters based in the heart of the particular community venue! It was a huge contrast to the school shows – some ‘adults’ finding it hard to ‘play’ at relating to the actors in role in the second half. They argued that you could not usefully apply the values of today towards judging those who lived long ago and had different attitudes. But others disagreed and we finally did some hot seating. Interesting insights emerged, especially from an historian who knew a great deal about the time of the GIs in Dorset. The commemorative sculpture at the end was moving, Lily being positioned, Madonna like, with a dual heritage baby on her lap and a white GI and black GI standing behind her back to back, their conflict unresolved. The chosen title was Unity.

Feedback afterwards was mainly very positive, though some felt the inter-active phases hadn’t added to the experience. Some of our previous community audiences have expressed the opposite viewpoint, so we will think more about it and continue tonight at Broadmayne, where a very good house is promised.