Our 2013 tour of GI Joe in Dorset, (GIJiD) to arts centres, village halls, schools and univeristies is over. We’ve had a chance to sift through all the Evaluation forms we gave out and add up the audience numbers. Over 1400 people watched the play and took part in the workshop afterwards.

The public tour included the Priest’s House Museum, Wimborne; Bridport Arts Centre; Melbury Osmund, Broadmayne and Durweston Village Halls (all 3 on the Artsreach circuit); Dorchester Arts Centre and the Shelley Theatre, Boscombe. The average audience number for public performances was over 80, which was very encouraging. Promoters told us this was higher than expected.

For the directors and cast, GIJiD was a very positive and often moving experience, which went beyond being just a theatre production. This was mainly due to the historical veracity of the story. I think we all felt like we were sharing an important – and previously hidden part of Dorset’s history. Credit for much of this should go to Louisa Adjoa Parker, the Dorchester based writer and researcher. We were delighted that she came again to the show and was equally enthusiastic this year as last.

Hearing direct responses from the audience afterwards was also very rewarding, particularly with relation to their own memories of the GIs in Dorset or their legacy. Several octogenarians talked about being children at the time and having their lives enriched by the temporary visitors from overseas. But perhaps the highlight was when one (dual heritage) member of an audience declared publicly that he was the son of an African American GI. He felt such ownership of the play that in, his words, he had been watching “his story” about his mother and his father. He then volunteered to come onto the stage to make the creative statue at the end of the performance, commemorating the event.

We are discussing possibilities for future tours and perhaps a film of GI Joe in Dorset, so hopefully it’s not the end of the story – just of one more chapter. Watch this space! 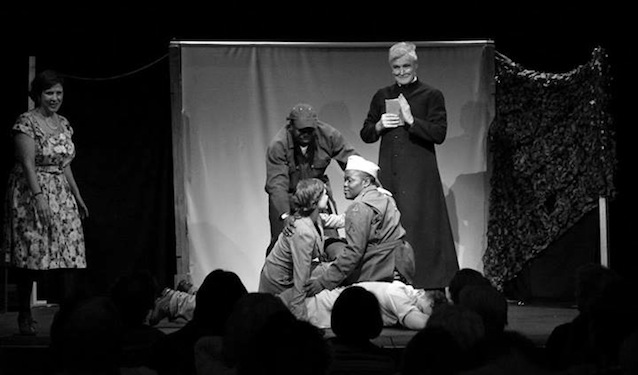